A.C. Kleinheider provides some excellent commentary on the loss of Jason Mumpower as he serves his last weeks in the Tennessee House. This is a wonderful piece of reflection; it's probably the best post I've read this year on any subject.
Jason and I were at rival high schools during the same time back in the Tri-Cities. His rise to the House and eventually to leadership was astounding. Even with that - and this is just my personal reflection - Jason never really seemed to embrace the whole process. Whereas people like Ron Ramsey, Zach Wamp, and Lamar Alexander handle political situations and campaigning without batting an eye, Jason never seemed 100% comfortable with everything - in many ways like Ed Bryant, Bill Dunn, and David Davis. This is in no means judgmental or critical. It's simply an observation, and perhaps a relevant one. In my opinion, it's easier to leave something with which you're not 100% comfortable.
I wish Jason the best. He brought quite a bit of "out of the box" humor to functions, and he will be missed.

Another Knock on Palin

Dan Cleary hits the nail on the head regarding Sarah Palin's stumping for RINO John McCain in Arizona - it accurately shows that she is not interested in getting any conservatives elected - except for herself, of course.
The 2010 primary season should be a very interesting one for U.S. Senate nominations on the GOP side. Establishment moderates (McCain, Charlie Crist) are being challenged by conservative firebrands (J.D. Hayworth, Marco Rubio). Well before the GOP picks up seats in both chambers come November, we'll have a good idea on whether or not this sort of change means anything at all to the American people or will be another example of "business as usual" on the Hill.

There's also more references to "f-words" and "n-words" than you can shake a stick at.

As the Republic Crumbles... 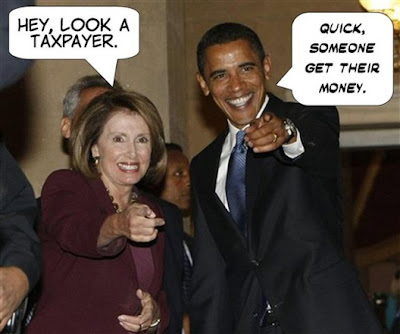 I'm watching "Tennessee This Week" on this fine day here in Knoxville, and I have to wonder:

Do you have to be delusional to Chair the Tennessee Democratic Party, or is it the office itself that makes one crazy?

Seriously, I want to know. Chip Forrester is on WATE with Gene Patterson now talking about the great job that D.C. Democrats are doing and how Tennesseans want to elect candidates that will assist the "new leadership" in their legislative initiatives.

Really? I mean, really? He keeps referring to Tennessee as a moderate state, too. That's funny. I seem to remember Tennessee going red in 2006 and 2008 - very possibly more so than any other state in the Union.

I understand that it's Forrester's job to do what he can to help his candidates, but what one has to realize that is by openly lying about things viewers (or readers) know to be false, that one loses credibility. It's no different than a closing argument where your client has basically admitted to the charge (be it contempt or a criminal offense) during his or her testimony. If an attorney then tells the judge that in his closing that his client didn't commit a contemptible offense or commit the crime, he loses credibility with the judge. The judge might tune out that attorney and ignore any valid arguments that he may have regarding other issues, like sentencing.

By spreading the joy that Tennesseans have with Obama, Pelosi, and Reid - in the face of poll numbers that show the opposite - Forrester risks being hastened to nothing more than white noise. Or, at the least, being compared to Kevin Bacon...

Dunlap has come up with a health care compromise for the Democrats and Republicans - just kill all of the sick people so that no one has to use the inept government-run health care system.
Just as long as you don't mess with Dunlap's disability filing... (You have no idea how this hits home, as there doesn't seem to be one person who is behind on their child support in this area that isn't somehow "disabled" for the purposes of not being thrown in jail.)