And I'm not alone. I spoke with several of my good Republican friends - folks who are ultra-active in campaigns in terms of their time, support, and money - who were all undecided as of the end of last week. For folks that usually have their candidate a year or two before the primary, we all are in uncharted waters.

As was documented on this blog (and others), I was supporting Herman Cain before allegations of an extramarital affair proved to be too much to overcome. I even stepped up as his county chair here in Blount County. I loved Cain's straight talk, his outside-the-Beltway background, and his promise to reform the tax code. But, alas, that was not meant to be.

With the field whittled down to four, I still find myself undecided at this late hour. After the last debate in Arizona, I managed to narrow down my personal choice to two candidates. Ron Paul may have a great understanding of economic issues, but his views on foreign policy would likely get us all killed and his ultra-libertarian views eventually collapse upon themselves when freedoms eventually abut each other. I also think that Dr. Paul would have a hard time winning over voters in a general election against Obama because of his presentation. So Dr. Paul will not be getting my vote.

Neither will Rick Santorum. I really want to like Santorum. He says several good things that I can support. I even had him on the shortlist of candidates for the White House back in May of 2005. But lots has happened since then. Santorum says some strange things that even have conservatives scratch their heads, all of which could be overlooked by a conservative voter if not for all of the times that Santorum has compromised his conservative principles when it has personally benefited himself or those close to him. For example, Romney's crushing of Santorum in the Arizona debate on the Arlen Specter issue, where Santorum supported the liberal Specter over conservative Pat Toomey. I very much remember that episode, and Santorum's explanation was inadequate in parts and downright untruthful in parts. His debate performance in Arizona (I scored it last, even below Dr. Paul's) was crippling. If he were to perform similarly in a general election debate against Obama, the GOP would be looking at a double-digit loss at the top of the ticket and quite possibly losses down ticket that could take the Senate out of play. I think Rick's a really nice guy and appreciate much of his service in the Congress, but I can't pull the lever for him this time around. 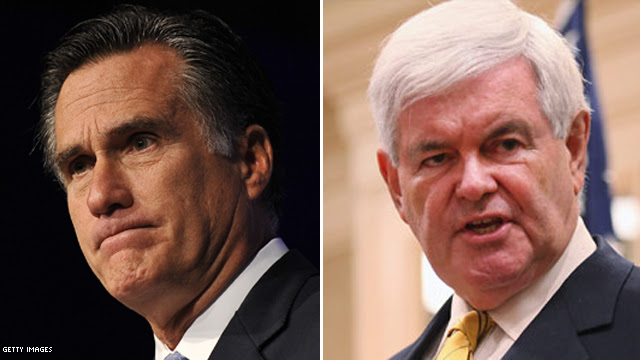 That leaves Mitt Romney - the former frontrunner who tried to sit on a lead and run out the clock but instead showed weakness by allowing for one upstart candidate after another to temporarily pull ahead of him - and Newt Gingrich - the debate master who is trailing in the polls in several key states and has allowed Santorum to pull much of the conservative base by default after such bizarre talking points as building a base on the moon. I've met both men - Romney is a really nice guy, while Gingrich really isn't. I am obviously concerned that Romney has such a hard time connecting with the middle class (even if the middle class under Obama is almost non-existent). His past statements when running for Governor of Massachusetts are very tough to swallow. Of course, they won't be in the general election. In the current political climate, I told a Romney operative several months ago that Romney would have been better served to have no elected office on his resume - particularly in Massachusetts, where he had to take positions that are toxic with the GOP base.

Meanwhile, I'm also worried that Newt's campaign has been mismanaged and unorganized. (How does one not get on the ballot in major states like Virginia? Folks like myself who are, for the most part, out of the game but still know how to run campaigns and get things done regarding ballot access, aren't that hard to find. Sure, campaigns are either for the energetic young like Austin Walne and Ted Boyatt or the learned sages like Tom Ingram and Bob Davis, but there are plenty of us middle-aged folks who could have been asked to help.) Given Obama's enormous money advantage, there is no room for a disorganized campaign in the general election.

Both candidates have endorsements from folks that I very much respect - Fred Thompson, Herman Cain, and J.C. Watts for Gingrich, Nikki Haley, Jan Brewer, and Bill Haslam for Romney.

I don't plan on waiting to Super Tuesday to vote. I can't recall the last time I voted on an actual Election Day. Besides, I like the idea of voting at the old Blount County Courthouse instead of at the high school. I can see the merits in waiting - we'll know what has happened in Michigan and Arizona by then. Romney needs to win both states, and I can see him doing that. Gingrich has to win Tennessee and Georgia to remain in the national conversation, particularly given that he likely would have won Virginia but failed to make the ballot there.

I remain undecided, but I hope to make up my mind in the next 24 hours. 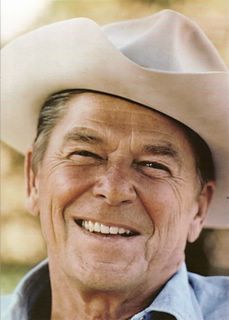 Our greatest President would have turned 101 today.

It's hard to believe that nearly eight years have passed since the VOLConWife and I said good bye to him with so many other Americans in the Rotunda of the Capitol.

It's equally as hard to believe how far we have fallen from achieving the goals that President Reagan wanted our nation to accomplish. I don't imagine that he would be too happy with where we are today, do you?

Take a look at our good friend and fellow blogger Terry Frank's new ad in her campaign to become the next Mayor of Anderson County.

That's a good, clean, simple ad there, folks. Terry would make a great mayor for Anderson County, and we wish her the best of luck in that pursuit. While Terry and I haven't agreed on everything through the years, I've known Terry for a good portion of my life and consider her one of the smartest, most passionate conservatives out there. Anderson County would be fortunate to have her as its leader.

I do note that Terry says that she will not raise taxes when she is elected, and, knowing Terry, I believe that will be true. I just hope that Terry and the rest of my friends running county and city governments recognize the difficulty that they are going to face if Governor Haslam's new crime bill passes. For whatever reason, Bill Gibbons - himself a former District Attorney - wants to pass the buck to local governments when it comes to crime. Well, that's not quite right. He wants to pass along significant added responsibility to local officials; there just aren't any bucks attached. Given how this is likely to play out, you might want to say an extra prayer for these folks (Tim Burchett, Ed Mitchell, Larry Waters, and, God willing, Terry Frank) as they do their best to steer our counties through some choppy budgetary seas.

What Happens in Vegas...

The MSM has become all too predictable, and Sunday's overreaction to Mitt Romney's win in the Nevada caucuses really goes to prove it.

As I've said here and on other media sources, Nevada did not matter in any way to this primary season. Romney had Nevada locked up months before Iowa. Besides the high Mormon population there (over 25% of the registered voters, which means that we could be talking about 40% of Republicans), Romney's crew had already struck deals with the unions in Nevada, including the very powerful SEIU. Nevada was even more of a sure thing for Romney than any other state.

So why the sudden need by the MSM to declare this primary season over? Romney is certainly in the lead, but he doesn't have 8% of the delegates that he needs to secure the nomination. Can we at least wait until Missouri to see what happens there, to see how Santorum does with no Gingrich on the ballot? We're a month from Super Tuesday, so it would be nice to get that far...

Why are the liberals in such a hurry to fast forward to an Obama/Romney showdown? You can be sure that it's not so that they can talk about the Democrats unwillingness to pass a federal budget in 1100+ days...