Should the Sixth District Look Outside the Box?

A.C. notes that he has talked to Ben and that he has not warmed to the idea of himself as a political candidate.

I'm of two minds on Cunningham for Congress. For the people of the Sixth District, and the American electorate as a whole, Ben going to D.C. would be fantastic. Ben is one of the best economic minds I know, and given that our political leaders are about to vote us into economic armageddon (if they haven't already done so by the time you read this), we're going to need people of Ben's intellect, experience, and character on Capitol Hill.

That being said, I know Ben and have to openly wonder if this would be a good thing for him. I always have to consider what public office - seeking it, working in it, keeping it - does to people. I saw the toll the grind of the Senate took on Senator Fred Thompson. I saw how tough it was for Congressman Ed Bryant to deal with the campaign grind. And both of my former bosses were experienced politicians at the time.

If Ben does decide to enter the fray, I am sure that he would find friends aplenty for his campaign. Ben has helped people throughout Tennessee to keep taxes low and to fight government waste. He has helped organize more conservative issue discussions than anyone could possibly know. While a potential Mae Beavers entry into the field might partially disrupt its formation, a Cunningham candidacy could very well formulate a grassroots network - both within the Sixth District and outside of it - that could be the difference in a divided primary where all of the other candidates look fairly similar.

I keep hearing the libertarians, tea partiers, and conservative grassroots talk about getting back to basics and keeping the politicians out of office. If that's really what you believe and you aren't so filled with apathy that you're willing to do something about it, you might want to contact ol' Ben Cunningham. He could be exactly the guy you want representing Tennessee in the U.S. House of Representatives.

This is of interest for Knoxville residents because Citadel owns most of the radio stations in the area, including country giant WIVK, talk radio's WNOX, and the woefully disappointing sports talk network WNML.

Ad revenues are declining (and expected to stay that way), and it isn't hard for me to see why in terms of WNML's performance. I have personally spoken to businesses that contract with that station for advertising and told them that I wouldn't be frequenting their establishments as long as they continued to support certain shows on WNML ("The Sports Animal"), particularly the morning show with station program director Mickey Dearstone, Title IX-hire Heather Harrington, and former Vol Jeff Jacoby.

For me, my objection is aimed at the poor quality of their show and my view that Knoxville deserves a better brand of sports talk radio. Jacoby sometimes offers some decent analysis (as does Monday morning guest Pat Ryan), but Harrington often has no idea which teams are in which athletic conference, and Dearstone would never have survived in this market if he wasn't his own boss. How bad is the morning show? I know dozens of hardcore sports fans who have paid for Sirius/XM hardware and subscriptions just so they aren't exposed to this show; it's that bad.

I am in no way suggesting that the failure of WNML is the cause of Citadel's demise. However, it is a snapshot of how one failed network - carried out over several other markets - can bring down a huge corporation. I'm sure that WIVK is a financial success; the biggest country station in East Tennessee has driven competitor after competitor out of the market for decades. However, it's not realistic to expect for their gains to offset the losses of other failed ventures.

Will Citadel's filing have any lasting effects on Knoxville radio? Only time will tell, but we could see a few changes - hopefully for the good.

John jumped.
Bart jumped.
Your friends are all jumping off the bridge before they were pushed off in 2012. You've always been more of a follower than a leader, and the rumors have been flying that your campaign coffers are as dry as our federal government's.
There's no time like the present. Get closer to the edge and take the plunge... 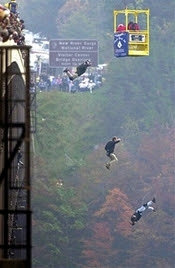