What's better at keeping one awake in the wee hours of the morning than massive doses of caffeine?

The Thunder from Down Under, and they are this week's double shot. I had to go a little old school and with the latest single from their new album.

And then a hard rocking anthem that is probably one of the best songs of 2008...

Silence Versus Oatney - IN A STEEL CAGE!

Michael Silence and David Oatney have gone at it before, but Michael probably crossed the line when he decided to delve into what can be construed as a personal insult with his dead wood column this week. Somebody call Vince McMahon at WWE - we need to settle this with a "loser leaves town" match!

While I like Mike, it's been hard to take him seriously lately on anything political. In October on several occasions, he not only predicted a win in Knox County for Obama (where he lost by over 23 points) but also started cheerleading for a "seismic (political) event" for the entire state (and we all know how Obama did in Tennessee). With those predictive powers, I don't think that Mike will be consulted by Vegas on any betting lines in the near future.

Sometimes I wonder if Silence is too worried about appeasing his liberal blogging buddies (which dominate East Tennessee in numbers, admittedly) a bit too much. I'm sure that he doesn't see it the same way, but then again what do I know? I only read his blog every day.

Guess I'll be the "worst of the worst of blogging" subject for next week. Good thing no one reads the weekend newspapers after the Thanksgiving holiday.

The Source of Global Warming

James Hogan has some scientific evidence that points to one shocking cause - the Sun.

Don't tell Gore. He'll probably talk Obama into nuking the star so that we can stop global warming.

The Psalm of Obama

I've received this too many times through e-mail not to include it here. It's amazing how he is setting the stage for so much of this, merely by the Clinton retreads and D.C. insiders that he is placing in positions of authority daily.

Barack is my shepherd, I shall not want.

He makes me bow down to big government.

He leads me beside the abortion clinic.

He leads me in the paths of socialism, for his name's sake.

Yea, though I walk through the valley of the shadow of liberalism, I will fear no evil, for Barack is with me.

His benefits and handouts, they comfort me.

Barack prepares a health care system before me, in the presence of my better judgment.

He fills my head with promises.

My welfare cup runneth over.

Surely, higher taxes and illegal immigration will follow me all of the days of my life; and I will dwell in the house of the Obamas' forever.

The rumors regarding Tennessee's new head football coach seem to change with the temperature around Knoxville. First it's Jon Gruden, then Bill Cowher, then Butch Davis, then Mike Leach, then Brian Kelley, then Tim Brewster...

It's nuts, and UT's recruits have had enough. They're jumping ship, and Coach Fulmer's top five recruiting class is in shambles.

Some people think that Lane Kiffin - previously of the Oakland Raiders and USC Trojans - should be hired to stop the bleeding and add stability to a disastrous situation. Of note, with Kiffin being currently unemployed, there would be no contract to buyout.

If Kiffin does come to UT, I know one of his old colleagues from USC that I want on his staff as recruiting coordinator...

If for no other reason but to embed this video 100 more times...

As first reported here, Karl Rove has saved Jackie and Dunlap from decades of frozen tundra, the French language, gay marriage, and socialized medicine in the Great White North:

Lots of names have been put into the public discussion for the constitutional officers that will soon be named by the GOP-controlled Tennessee General Assembly (wow, that feels good to write...). Jim Bryson, Bob Davis, and Van Hilleary have been mentioned for Secretary of State, as have others.

No real frontrunner has emerged for the State Treasurer position, but word has reached me by various sources that Vance Cheek, Jr., a former Claims Commissioner under multiple gubernatorial administrations, mayor of Johnson City, blogger, and 1st District Congressional Candidate, may be putting his hat in the ring for consideration.

With a bench as deep as the Tennessee GOP's, I don't envy the party's decision on choosing the new officers.

"We wake up on the morning of November 5th. Are we screwed, or totally screwed?"

The answer was "totally screwed," and it appears that Jackie and Dunlap decided that they didn't want to be on the not-so-fun end of the screwing.

After a few phone calls, here's where I think we stand at the end of the night:

President of the United States

I see the numbers that many of my conservative brethren (like Vance Cheek) are pointing to, but I just don't see McCain carrying Virginia and Colorado. Those states hold the keys to the White House, and I see Obama riding the coattails of strong Senate candidates in both states to the win.

As of today, I am predicting that the Republican firewall in the Senate will hold. I also would not be surprised if one of the two unaffiliated Members - Senator Joe Lieberman - starts caucusing with the Republicans instead of the Democrats, who have demonized him. With 44 Republican votes in the Senate, President Obama would have to work with the GOP regarding his agenda to socialize the country. As noted above, he will not have a Reagan-sized mandate to work with, so this will be for the good of the country.

Way too complicated to tell right now. The Democrats are going to gain several seats, but they will lose some, too (as with serial adulterer Tim Mahoney getting his clock cleaned by Tom Rooney).

Yes, I am predicting a clean sweep for the Republicans here, based on my visits to the districts and internal polling to which I have been made privy. I would love to predict 19-13-1, but I just have no faith in write-in campaigns. What will be real interesting is seeing if the Republican-led Senate decides to seat Tim Barnes since he shouldn't have been on today's ballot.

Again, this is too close and too complicated to call right now. I see the Republicans picking up a few seats. But the big question is - will it be enough to take the Speaker's gavel away from socialist/anti-gunner Jimmy Naifeh? (If there was any justice, Rory Bricco would beat Naifeh today and be done with the "Boss Hogg" question forever...)

Jackie and Dunlap understand why Obama is protecting his aunt:

One of the bad parts about working for candidates is that I rarely get to many of the Election Night parties. It's become worse as I tend to work (like other GOP attorneys such as Randy Stamps and John Ryder) on the voter fraud end of things as the votes are counted and reported.
I don't think that it will be an different this year. I'm staying in state, but I have a few rural counties that I will be working in and am unlikely to make it to Nashville in time. However, for those of you who are looking to watch the returns with a particular crowd, I thought I would leave some of the ones I know of here on VOLCon. I'm not sure if all of these are open to the public (invitations may be needed for some), so call ahead.

Knox County GOP
Crowne Plaza
Knoxville
No Information on Start Time, as website has not been updated in months

TN GOP Touches Down at Tyson 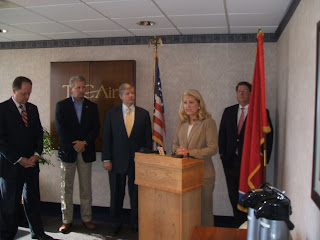 Several Republican activists and media outlets turned out at Knoxville's Tyson McGhee Airport to meet with members of the Tennessee Republican Party leadership as part of a statewide fly-around campaign to remind people of the importance of voting in General Assembly elections tomorrow.

Playing off the media coverage devoted to the race for the White House, Senator Norris stated that Tennessee was indeed a "battleground state," being that Republicans had a real chance to rest away control of the Tennessee House for the first time since Reconstruction. All speakers pointed to the local campaigns of Ken Yager and Mike Faulk as examples of races that could bolster Republican control of the State Senate and keep bad Democratic ideas like toll roads, raiding of the road fund, and keeping Tennesseans from selecting their appellate court judges at bay.

Media questions tended to focus on the McCain/Obama race and not on who controls the purse strings in Nashville, which is a shame. People need to understand the importance of what goes on in Legislative Plaza, and that was the purpose of the fly-around by these leaders today. 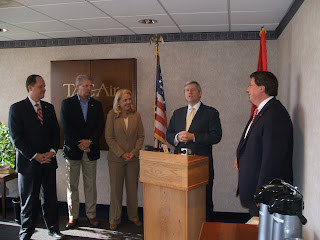 Many of the leaders of the Tennessee Republican Party - including Chairman Robin Smith, Senate Majority Leader Mark Norris, and House Caucus Chair Glen Casada - will be traveling from one end of our great state to the other, rallying the troops as Republicans try to take both houses of the General Assembly for the first time since before Reconstruction. This is in addition to the McCain rally at Tri-Cities Airport on Monday morning, for which tickets are needed for admission.

All times and locations are listed below.

This story is just forming but several questions need to be answered - and quickly:

Strange stuff, for sure. But this is more an indictment of the mainstream media, which felt obliged to vet "Joe the Plumber" in 24-hours but NEVER has done the same for the Democratic nominee for President of the United States.

It's apparent what the NRSC thinks: